This was not the scene I had been looking forward to photographing during my first visit to Glacier National Park, while on a road-trip ranging from the deserts of Arizona, up the coast of California, and inland through incredible terrain to reach these dramatic mountains; I had been anticipating lush green forest and beautiful valleys framed by the sharp outlines of enormous ancient peaks, with an excess of crisp late-summer sunlight and photographic opportunities.

The scale of the landscape did not disappoint, but as we packed up our tent and camping gear from a forested campsite on the valley floor, readying for a scenic drive up Going-to-the-Sun Road, the acrid smoke of nearby wildfires began to settle through the trees. The sunlight had the burnt orange hue now well-known across the North American West as fires ravage huge swaths of wilderness. Still, the park rangers indicated the road was open, and as it was our primary route to our next campsite we set out on a surreal, smokey, sobering drive.

Smoke fills the sky between mountains and drifts through a canyon at Glacier National Park, Montana as viewed from Going-to-the-Sun Road 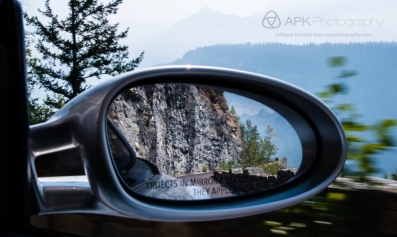 Smoke fills the sky between mountains and drifts through a canyon at Glacier National Park, Montana as viewed from Going-to-the-Sun Road

As Going-to-the-Sun Road led us up from the valley, the smoke could be seen rising in great grey plumes and settling across ridge-lines, creeping downslope, and filling the sky between mountains. Quickly the views became vast – glacier-carved, rugged, rocky slopes with the clearly defined striations of an ancient geologic prehistory, swaths of green forest punctuated by the first brilliant yellow leaves of fall, and across it all a blanket of heavy, shifting blue smoke.

My eyes stung as we descended through Logan Pass and the air became increasingly more difficult to breath. My husband had fond memories of a lovely forested trail just off the main road, with a tumbling creek passing beneath an arched bridge, and as we watched for likely candidates, the road crossed into a stark landscape of recently-burnt forest.

During the smoky, dramatic fire season of 2017, a visit to a recently burned region of Glacier National Park reveals a landscape still recovering. The forest and banks of Baring Creek and Sunrift Gorge were ravaged by wildfire during the Reynolds Creek Fire in 2015. During this short walk along the water through skeleton trees the air was thick with smoke from several fires burning throughout Glacier National Park.

We found the spot, easily accessed at Baring Creek, and decimated by fire in 2015; surrounded by skeletal trees and scorched rocky ground, set against smokey mountains, the creek ran clear and fast, but there was otherwise an eerie stillness to the scene. No rustling of wind through leafy trees, no birdsong, and an unsettling sense that the danger of active wildfires were only a few ridge-lines away. 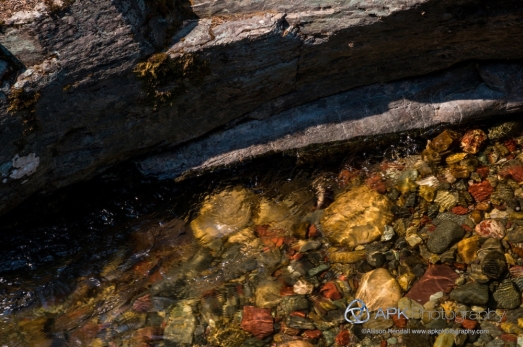 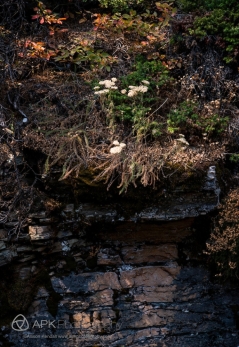 During the smoky, dramatic fire season of 2017, a visit to a recently burned region of Glacier National Park reveals a landscape still recovering. The forest and banks of Baring Creek and Sunrift Gorge were ravaged by wildfire during the Reynolds Creek Fire in 2015. During this short walk along the water through skeleton trees the air was thick with smoke from several fires burning throughout Glacier National Park.

Having lived most of my life in California, fire season and its consequences are not new to me. I often observe recent fire scarring in familiar landscapes, and have nearly always see a shift in the species that take hold once vegetation starts to return. Seeing a forest in this state of blackened, skeletal remains was new to me – it is unclear whether the trees will ever recover, or if what was once a verdant forested mountain slope may now be destined to become a rocky, scrub-covered slope as the decaying trees eventually fall.

Much of our recent trip was shaped by fire; we could not take our planned route up the coast of Oregon due to evacuation orders along the highway, and even our inland detour was so choked with smoke that visibility became severely compromised and the sun disappeared in a cloud of orange-brown haze. We were lucky to drive along the Columbia River Gorge before it became a fiery inferno, and I am now wishing we hadn’t been on such a tight schedule and could have stopped to enjoy more of the old-growth forest before a carelessly-started wildfire stripped the landscape of green trees.

Even after leaving Glacier National Park and crossing through badlands to the open plains of Saskatchewan, we were greeted with news of fires further north in the province, and the smoke has been impacting us at home.

Fire is a necessary element in many ecosystems, but decades of overly aggressive wilderness fire suppression combined with extensive drought has made fire conditions exceptionally combustible. With time, many of these places will recover and life will return, but in so many instances the landscape will be irrevocably changed. I look forward to returning to Glacier National Park, Montana, to see how the landscape changes with the seasons, and hopefully I will be able to document the next phase of recovery from wildfires in this beautiful place.

A full set of images from Glacier National Park can be found at www.apkphotography.com